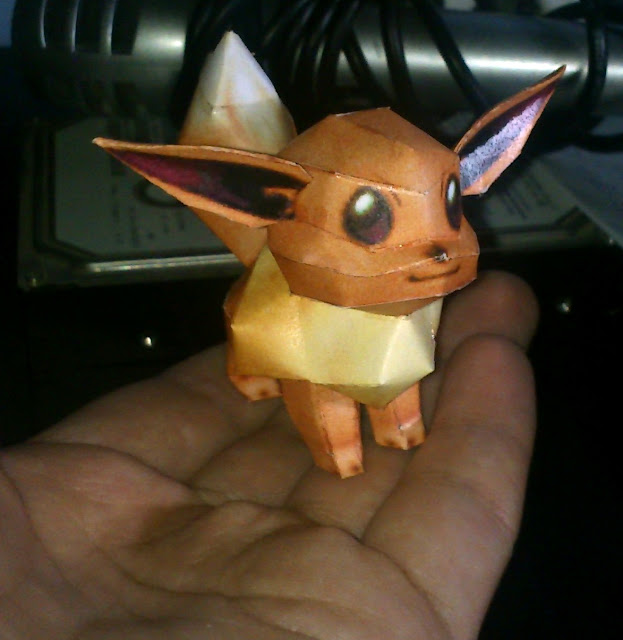 Eevee is a mammalian creature with brown fur, a bushy tail that has a cream-colored tip, and a furry collar that is also cream-colored. Eevee has brown eyes, big ears, and pink paw pads. It has traits of rabbits, raccoons, foxes, dogs, and cats. Eevee is said to have an irregularly shaped genetic structure, enabling it to evolve into multiple Pokémon. . Eevee are quite rare in the wild. They sometimes live near cities and towns. It is possible for Eevee to live almost anywhere, and they may evolve to suit their surroundings. Eevee has an irregular genetic code and can sometimes evolve in accordance to its environment. Vaporeon when exposed to a Water Stone.Jolteon when exposed to a Thunderstone. Flareon when exposed to a Fire Stone. Espeon via happiness during the daytime (Generation II onward). Umbreon via happiness during the nighttime (Generation II onward). Leafeon when leveled up near a Moss Rock (Generation IV onward). Glaceon when leveled up near an Ice Rock (Generation IV onward)
About the Model:
Height: 6.2cm
Width: 7.6cm
Depth: 7.2cm
Number of Pages: 1
Number of Parts: 19
Difficulty:3/10
Download A4 / Letter
Build order: Head, Ears, Fur, front feet, body, hind feet, tail.
Notes: as you can see from the picture, it's pretty small.