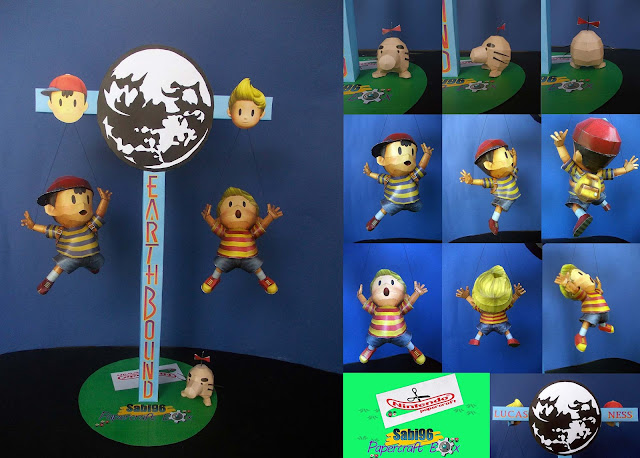 Ness is the silent main protagonist of EarthBound. He greatly enjoys baseball; not only are most of his weapons various types of baseball bats, but he can also equip several baseball caps. In the EarthBound Player's Guide, he is said to wear a special baseball cap with his favorite team's logo on the front. Lucas is the Central Character of Mother 3. He is from Tazmily Village. He is the gentle twin of Claus. He usually uses sticks and baseball bats as his primary weapons, along with his powerful and strong signature PK Love power, which is the ability to pull the Seven Needles in order to wake the Dark Dragon which is sleeping underneath the Nowhere Islands. The Mr. Saturn
are a species in EarthBound and Mother 3 and serve as the unofficial mascot for the trilogy. They are strange, possibly extra-terrestrial life forms who reside in both Eagleland's Saturn Valley and the Nowhere Islands's Saturn Valley in EarthBound and Mother 3.
About the Models:
Ness and Lucas (Stand):
Height: 60.2cm
Width: 44.1cm
Depth: 25.4cm
Difficulty: 6/10 (4/10 if you use the alternate hands)
Number of Parts: 151 (+ 8 alternate hands parts)
Number of Pages: 20
Mr. Saturn:
Height: 8.9cm
Width: 7cm
Depth: 10cm
Difficulty: 2/10
Number of Parts: 13
Number of Pages: 1
DOWNLOAD AT NINTENDO PAPERCRAFT
Instructions : Just follow the numbers. The stand has no particular order, therefore it isn't numbered.
Notes. Ness and Lucas each have an alternate set of hands. Each hand is 2 parts, consists of 2d fingers and 3d palms. You can use these parts on your build if you think that the fingers would be hard to build.