Seven Wonders of the Ancient World Pt.4 – The Statue of Zeus (Temple of Zeus) 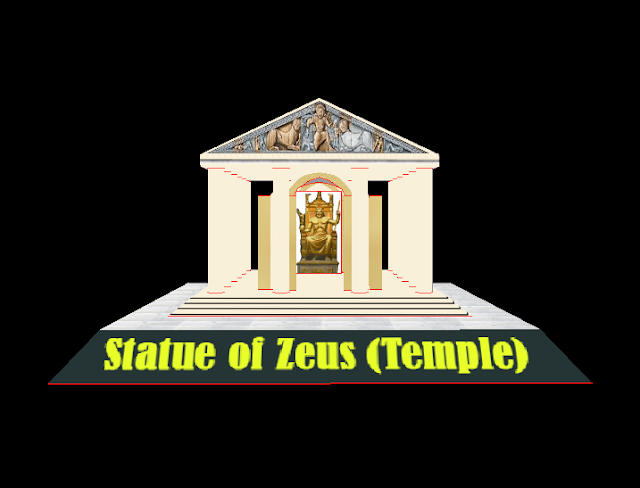 The Statue of Zeus at Olympia was a giant seated figure, about 13 m (43 ft) tall, made by the Greek sculptor Phidias in circa 435 BC at the sanctuary of Olympia, Greece, and erected in the Temple of Zeus there. A sculpture of ivory plates and gold panels over a wooden framework, it represented the god Zeus sitting on an elaborate cedarwood throne ornamented with ebony, ivory, gold, and precious stones. It was regarded as one of the Seven Wonders of the Ancient World until its eventual loss and destruction during the fifth century AD.No copy of the statue has ever been found, and details of its form are known only from ancient Greek descriptions and representations on coins.
About the Model:
Height: 8.4cm
Width: 15cm
Depth: 24.3cm
Difficulty: 5/10
Number of Pages: 4
Number of Parts: 41
Download A4 ONLY
Build order: Base, temple floor, zeus, temple inner body, inner collumns, outer collumns and roof
Notes: You have double back walls, so you can glue one inside, so if you look at zeus you will see a colored wall.