0 Comments
24 enero, 2013 / Pepa Cola
Yoshi (sometimes specified as Green Yoshi) is one of the heroes of the Mushroom World and an ally of Mario and Luigi. He is a member of the Yoshi species and has aided his brethren in saving their homeland on multiple occasions. Yoshi has also saved other kingdoms from the villain Bowser as well. In his youth, Yoshi managed to rescue and protect Baby Mario and Baby Luigi from the wrath of Kamek and the Koopa Troop. According to Super Mario RPG: Legend of the Seven Stars, Yoshi is the only one of his species who can speak the language of the other characters. However, in later games, he doesn't speak the language (as shown in Mario Superstar Baseball and Mario Super Sluggers). This is contradicted once again, in Super Mario Galaxy 2, when Yoshi speaks in perfect English. Yoshi made his very first appearance, game-wise, in the Super Mario World level, Yoshi's Island 2. The roles he plays in the series vary from game to game.
About the Model:
Height: 30cm
Width: 14.7cm
Depth: 24.9cm
Difficulty: 4/10
Number of Pages: 10
Number of Parts: 55
Download A4 only
Build order: Follow the Numbers.... nose, eyes, head, arms,body,legs (don't close them),shell,tail,close the feet.
Notes: If the package is corrupt, redownload it. 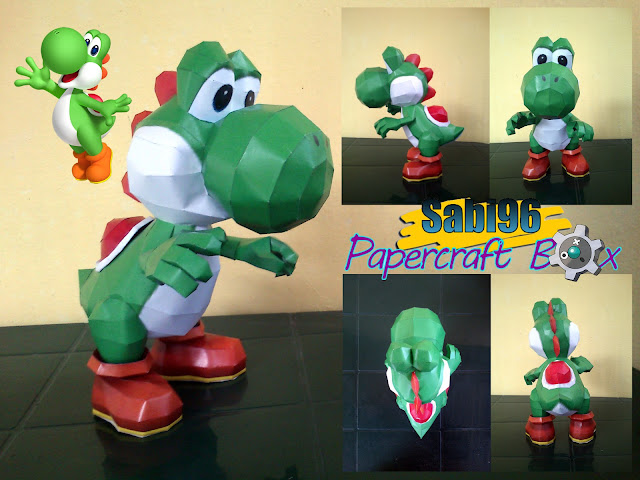